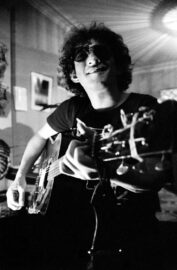 Metro Balderas is one of those songs that anyone who grew up listening to rock en español would instantly recognize; the moment we hear it, we’re already singing and dancing along to it.

I don’t remember where I heard it first; may have been the local station that played rock en español, my friends’ playlists, some CD, at a party, etc. I also don’t remember if I heard El Tri’s version first or Enanitos Verdes’. What I do know, is that until just a few days, I’d never heard the original. In fact, I had no idea that El Tri’s version wasn’t the original, much like many other rock en español listeners, I’m sure. The honor goes to a singer songwriter called Rockdrigo González, recorded back in 1982 for his album Hurbanistorias (1984) [songs 40-51].

In the original version, Rockdrigo performs the song with just his guitar, harmonica and voice. El Tri’s version, from their 16th studio album Simplemente (1985) changed the lyrics and arrangements enough that the copyright for the song is credited to both Rockdrigo González and Alejandro Lora, leader, vocalist and bassist for El Tri. El Tri rearranged the song “for a whole rock band, plus a saxophone, giving it a less intimate feel, and making it faster, more rocker, with a ‘catchier’ rhythm.”

Rockdrigo’s original version took me by surprise, and I must say, I really liked it! The rocker versions cut out the intro, and much of the central monologue, where we find out the narrator of the song has hijacked a subway train and begins to tell his story about losing his girlfriend somewhere in the overly crowded Metro Balderas, the name of a subway station in Mexico City.

What other music does this remind you of? Cancel reply

A personal project to record and connect new music encountered and old memories made.